One doctor attends to 6,000 patients in Nigeria 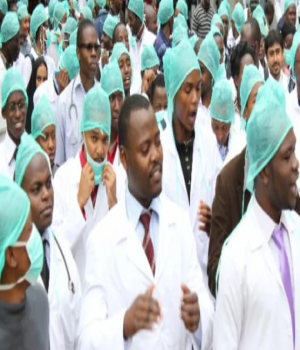 One doctor attends to 6,000 patients in Nigeria

The World Health Organisation (WHO) has said that the current ratio of doctor to patient in Nigeria is at one doctor to 600 patients.

Professor Titus Ibekwe, the Head of the Ear, Nose and Throat (ENT) department of the University of Abuja, disclosed this on Wednesday, January 25.

Prof Ibekwe said that this ratio is bad for healthcare delivery in the country. The professor who is also the former Vice President of Nigeria Medical Association (NMA) said that the medical personnel in Nigeria were constantly overwhelmed by the large number of patients.

The professor said a lot of healthcare facilities in the country are outdated while many are also dilapidated.

He said: "Today as we speak, the current WHO performance rating places Nigeria 187th out of 191 nations. That is really deplorable and not expected of the giant of Africa.

"The WHO recommends a minimum of one doctor to 600 patients but recent analysis carried out by the NMA shows that in Nigeria, one doctor is attending to 6,000 patients.

"Another issue is healthcare financing. In 2001, right here in Abuja, all the African Heads of State gathered and came up with a resolution which was applauded by WHO and the United Nations that they will dedicate 15 percent of their country's annual budgets to health, but since then till today, the best we have achieved is six percent.

"In the 2017 national budget, the allocation to health is 4.1 per cent while in 2016 it was 4.4 per cent and we are talking of minimum of 15 per cent to achieve basic medical care that a citizen needs.

"In the 2017 national budget, the allocation to health is 4.1 per cent while in 2016 it was 4.4 per cent and we are talking of minimum of 15 per cent to achieve basic medical care that a citizen needs.

"The National Health Act took the country 10 years before it was passed and this is three years after its passage, implementation has not commenced and every year one million children die, 56,000 women die from issues around pregnancy.

"Nigeria still rank number one in issue of HIV/AIDs, second in woman that died from pregnancy-related causes, one in childhood death and tuberculosis."

Meanwhile, doctors under the aegis of the NMA have lamented the poor facilities in the country while also lashing at President Muhammadu Buhari and other top government officials for seeking medical treatment abroad.

Back to posts
This post has no comments - be the first one!
UNDER MAINTENANCE
Best Java Games, Apps

Full summary of harvest of corruption by Frank Ogodo (5)

In dependence by sarah ladipo (1)

THE SUCCESSORS by jerry agada (1)

What type of fuel do airplanes use? (1)

How to run java apps on android (1)

How to run java apps on android (1)

Theme of Harvest of Corruption (1)